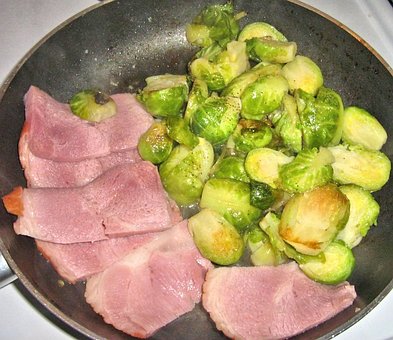 Brussels sprouts grow on stalks, and the smaller the sprout, the sweeter. They’ve been around since the 16th century and found their way through Europe and across the channel to the British Isles from their native Belgium. Their bigger relatives, cabbage and kale, had grown wild and are believed to have been domesticated centuries before by the Celts, presumably before 1000 B.C. Though the Romans are often given credit for introducing this vegetable to their European neighbors, the humble cabbage appears in food histories and is usually credited to the Celts, as their armies invaded the Mediterranean areas, where the Romans embraced it (but they certainly didn’t embrace the Celtic armies). It became a popular food, as it was easy and inexpensive to grow and may be dropped into a pot of boiling water and eaten plain or in a soup or stew. No blue-blooded Irishman would observe St. Patrick’s Day without a plate of corned beef and cabbage.

Throughout history, conquering armies have taken their popular foods into other countries and, based on the climates and growing conditions, cabbage took on various colors and appearances. Regardless of who gets the nod for detecting this popular vegetable, it was widely accepted in Europe and frequently fermented and chopped. (Once again, explorer Marco Polo missing out discovering cabbage in his travels but possibly ate it in his native Italy.)

Cabbage made its appearance in the usa around 1700 and was likely grown and eaten by the colonists, in addition to some Native Americans. Although usually cooked, in the 1700s Winter Park Rat Removal created a raw “cabbage salad” that became what is now our modern day coleslaw. Centuries before, cut and initially eaten with vinaigrette, the Dutch took coleslaw into a new (and less healthy) amount with the addition of egg, some sort of fat and dairy, normally in the form of our mayonnaise. This version was referenced in American literature as far back as 1785. Since it was highly perishable and cluttered, it surely was not packed into the bags of army soldiers or cowboys, but it has thrived as a favorite side dish with all-American sandwiches, hot dogs and burgers, and a popular salad with barbeque and fried chicken.

When the wildly popular fast food restaurant that specializes in poultry removed it from their menu, there was a nationwide uproar (including from this author). They replaced it using a spinach salad, but that just did not cut it for coleslaw lovers, which attests to its popularity.

And talking of shredded cabbage, the Germans, Czechs and Polish have their beloved fermented sauerkraut, which is usually served as a hot vegetable. Jewish delis
Serve it cold as a side for sandwiches and a significant filling in Reuben sandwiches.

So where does this leave our Brussels sprouts? Over 90 percent of the U.S. source of these mini cabbages are grown in the cool climate of San Francisco and
Agricultural areas just south of the Bay. For all you Brussels sprouts haters, you can blame the French settlers who brought them into the U.S. around 1800. Production began in the Louisiana delta and eventually found its way to the West Coast where the developing climate was more favorable.

Though they are a popular item on holiday tables, this author advises that you follow recipes from top chefs to ensue they turn out tasty, company and well-seasoned. And incidentally, Brussels sprouts top the list as the most hated vegetable in the U.S. and consistently make the top five record globally. So for those of us in that camp, they’ll be absent from the family dinner table. Bon appetit.